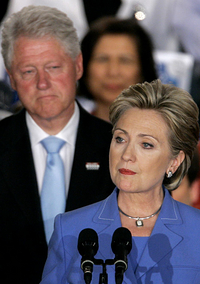 As I was lifting my leg to relieve myself on the newspaper this evening, I noticed an article in the Wall Street Journal that said ‘Democrats look to life after Clinton.’ Well, that is an odd thing to say. Life after Clinton? Really?

Hillary Clinton may never become president, but she will become even more powerful than a mere president. She will become a power center where every Democrat that wants to sit on an influential committee or even run for president in the future will need to come and pay her homage and get her blessing. She will, ironically, become Ted Kennedy’s successor.

With Bill right behind her.

One Reply to “Hillary is going nowhere”

Never been seen in these places.

It is a violation of Federal Law to use anything in this blog in a manner inconsistent with its labeling. Ok, I don't really care what you do with anything here as long as you don't copy it and represent it as your own work, though I'm not sure why anyone would really want to do that. Nothing in this blog should be construed as tax or financial advice. In fact, none of this is advice at all, just a bunch of random words strung together for entertainment purposes only.

By reading this blog, you attest that you are doing it of your own free will and will hold us harmless for anything that does or does not happen to you as a result. In short, don't try to sue us; we got nothing worth winning in a judgment or settlement.

We're a pack of dogs, for Pete's sake.